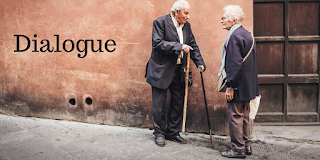 Dialogue is not only a way to learn about our characters, it also is a way to create tension.

As you sketch out your scene, think about what kind of dialogue would happen.

Action beats: beyond he said, she said.

They tell us who is talking.
•       “This has conk rot,” a logger yelled from the top of a tree. “It’s no good. Check the others.” (We see who’s talking, where he’s at, and his yelling injects emotion.)
•       “I’ve been away at school for some time.” Becca glanced out the window.
They give us information on the setting.
•       “Soon as I get the horses and stage put away,” Josh replied, climbing back in the driver’s seat.
•       Maggie pulled out a chair for her at the kitchen table. “I have some biscuits from breakfast and some of last year’s strawberry preserves left still. There’s coffee, or I could make you tea if that’d sit better.”

Whenever you can, make your action beats do double or triple duty. Go beyond who’s talking. Let the action show us where we are, the character’s emotions and state of mind.

Read your dialogue out loud. Even though it’s not “real,” it should still sound real and flow well.

•       Go to the above scenes and rewrite from another character’s POV. How does that change the scene? Does it make it more emotionally compelling? Or less?
•       Write a scene with interior monologue. Then rewrite it as dialogue. Which works better? Or is it a combination of both?
•       Go back to any exercise above and look at your dialogue tags. Can you make them do double or triple duty?